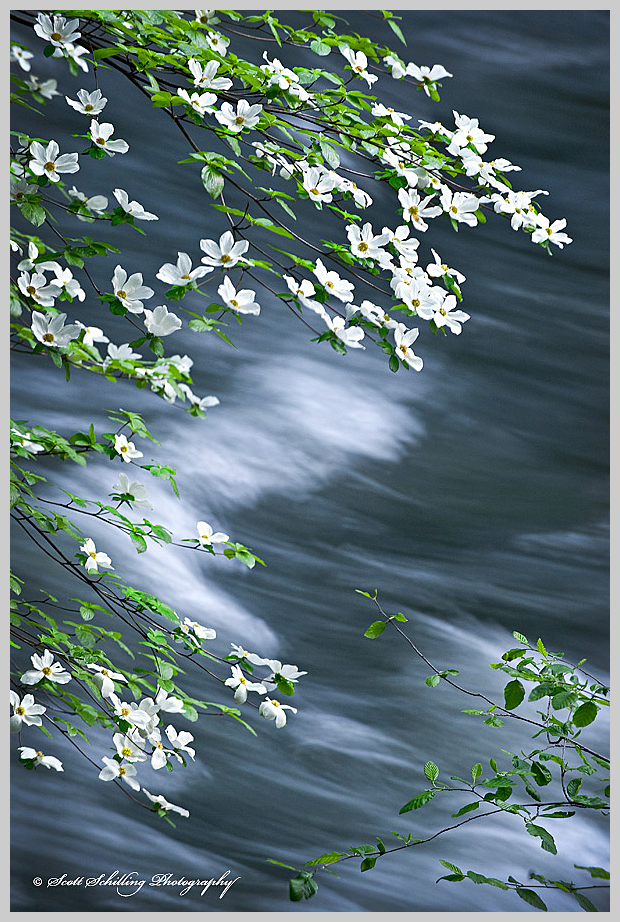 Previous Next
← previous day next day →

Dogwood along the Merced River

Don Smith, Mike Hall, and myself were searching for some Dogwood along the Merced River to photograph while the water was running high. Most of the flowers had disappeared but we did locate one promising location the night before. I returned with Mike and we attempted to photograph this dogwood tree in the early morning - I like the feel of the water running by and the wonderful tones in these flowers. These are a bit difficult to shoot due to the constant motion of the air as the river is flowing beneath the flowers - you have to wait and be patient for a moment of stillness - then shoot fast!

A brilliant composition, great color and wonderful light in this stunning image Scott! I love the motion blur in the water and the branches of flowers seem to be reaching out to wet themselves in the river...An instant favorite with me:)

incredible shot! the flowers are sharp in contrast to the river in the background..your patient is well rewarded indeed.

A brilliant composition and a brilliant DOF. This is so enjoyable to look at, fresh and lively. I like this kind of shot.

Your patience was well rewarded Scott! This is a definite 5 out of 5! ;-)

Your patience really paid off here, Scott- this is just beautiful!

What Scott failed to tell all of you was he really never slept the night before making this image. We had been shooting star trails atop Sentinel Dome the night before (see Scott's previous post) and did not return to our hotel room until almost 1 am. The group was leaving for a moonrise shoot at 4 am. After Scott captured this image, he had a short break for breakfast then embarked on an 8-hour (and a 2,400 ft. vertical) hike to Yosemite's back country to shoot waterfalls and rainbows. My point in relaying this story is that great photographs are made with lots of hard work and dedication to craft. We all get lucky and nail an occasional "keeper" from time to time, but consistency in art is a by-product of effort. Scott has developed into an excellent photographer (and his following here on Aminus3 confirms that), but his images are the result of the effort he applies - he is an excellent example of someone willing to put forth the effort in order to succeed. Great job Scott!

wow - Don's story provides a lot of background!
I'd say the lack of sleep was worth the trip and effort - your shot yesterday is outstanding and this one is pretty nice as well - great work Scott

great photo! Love the contrast between the sharp flowers and the blurred water in the background. Great work!

Your sleepless night and hard work really paid off, Scott. This is gorgeous!!

I will agree with Don Smith's comment above that hard effort will award you with great photographs! This one is just the confirmation of that statement...You need to be very patient to capture these little flowers still and look so good at the same time...

This is definitely a "keeper" as Don mentioned. Truly one of the best photos I've seen in a long while. Those blossoms look amazing against that water. Great work, Scott!!

wow ! I love it ! so exquisite ! japanese mood ! I love the motion of water running by and the elegant composition of the branches of flower ! all is excellent : DOF, light, contrast, colours ! a great one indeed !

This is stunning....a superb shot!

Beautiful contrast of focus and soft blur. The blue tones of the water really complement the white flowers and their green leaves.

Comments? This image speaks for itself.

This is such a beautiful photograph - bravo.

I really like the decision to make this shot vertical.

Love the combination, a wonderful picture